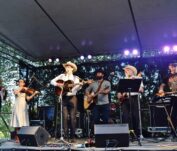 Back in time, experienced teacher and tireless musician Viktor Timashov created a new partnership with IT student Dominyk Raila who lived in Klaipeda city. Viktor immediately noticed that Dominyk has an unusual voice and good taste for music. However, after a few sessions, they decided to turn into the traditional country music style. Which Henk Williams played for years. Moreover, to find the right songs were not easy, Henko’s unusual singing techniques and the peculiar style of music made things different. But Dominyk’s perseverance and youthful excitement gave the right push to move forward in music creation. After half a year of rehearsals, a project called “Hank Williams tribute“ made their first concert. Where Dominyk took place as a vocalist. Also, he was assisted by Viktoras (bass) with his daughter Alvita (violin), as well as Artūras “Maxas” Petruoka (steel guitar), Andis Retejums (acoustic guitar) and Andrius Beržonskis (accordion).

We hope that this young, but the experienced band will receive huge attention from the crowd in Visaginas. In addition, Hank Williams will have some presents on the festival’s small stage and also in a lounge area at Domino shopping mall!